Last year in March, we nervously and hastily left, we barely caught the last flights or just missed them. We switched to bus and train and car. It was like an escape. A getaway back to our homes and adopted homes to breath again, to feel safe — until we had to realise that this safety was only seemingly one. We’ve come all the way up to here. In this time, several things happened, but plenty of things didn’t happen. We are different now because it’s difficult for us to be the same old ones. Vacancies will newly be filled. We are still looking up to the sky, more often than before, and we try to interpret the play of the clouds as well as the lighting conditions. Armed to the teeth, we tenderly bed our hopes, and while for some the curtain falls forever, for others it rises again.

“In the middle of Georgia, a metal gate marks the access to many hectares of forest and a crisscross of forest roads. If the trees here could speak, they would tell the story of saw blades cutting into old wood and of tires groaning under heavy loads.” [1]

“Burien is a suburb of Seattle in the state of Washington. Who lives here has made it to wealth with hard work. Yet, back in 1996, one resident chose the criminal shortcut to success.”[2]

“Bradbury is a suburb of Los Angeles, about 40 km away, with a population of approximately 1000 individuals. The houses are in gated communities and cost eight million dollars and more. A paradise for the rich and famous, hidden and well protected, until that morning in 1998.”[3]

“Largo in Florida, perfectly located between the Gulf of Mexico and the Tampa Bay. There are two categories of people here: tourists who come and go, and townies who live here all year round. The latter are a tight-knit community and if any of them is found with a slit throat, it gets to everyone.”[4]

The voice from offstage, which tenderly veils all those stories, is capable of teaching us without doubt that the most dangerous thing of all is the idyll. The beginning, mostly a geographic description, leaves room for doubt. However, the story takes its course and moves on to the complete catastrophe, which in turn, but unfortunately, leads to a sort of unsatisfactory happy ending. One with which we have to spend quite some time, as it seems. Before the actual ending of the story, which is based on true events, so it is pointed out, the beginning of a new one starts already. This overlapping is mainly happening in the brain of a hyperactive consumer, though, in fact it brings thrilling things to light if only of atmospheric nature.

In this fog, bundling up the sum of occurrences, places and situations, there are sometimes flashes of clear pictures that we will remember for a long time even if the course of events has already faded away. The fog unites things, combinations of which we were not capable of imagining before. These mentioned clear pictures mean action, and the will or the overwhelming need to procure change. Change is progress.

While some threw on their work clothes for a long time, what doesn’t exclude further discussions before the actual start of work, the other did NOT rally her friends ostentatiously, but she looks ahead quite boldly as if she were part of the whole thing; as if she were brother and sister of her own cat and even of the entire nature and surroundings, yet, maybe of the whole world. While some in the open-plan studio are defying people, tools for painting and the permanent coming and going; strange things happen behind the back of the others. For a moment she strikes a pose. Although, not to stand out, but rather to accentuate the branches in the background and the things that have happened or have to happen. As a medium of a universally applicable and relevant message. The focus is not on the work and the sweat, nor on the brawn, more likely on the brain, but certainly on the thinking and doing.

The big sculpture, the full-length movie, the great morals, the painting; all these are nothing without full dedication, without feeling. There is a constant alternation of going public and sinking into one’s thoughts. Doubt and devotion are predominate, not proof. The work grows in its breaks, and you are learning from what you didn’t know.

It is always about the world and never about “Heimat”. It’s about fearlessness as well as dilettantism and about dragging mistakes before the curtain as if they were relatives for whom one is not responsible, but still, now and then, is feeling ashamed. Besides it is also about intuition. An intuition that can be tremendously precise. Communication and denial, retreat and attack are invisibly crouching in the fog, and are walking hand in hand as soon as it clears.

How many things we could get to collapse if we united the forces? What could we create, what conquer, or how much? To what extent? Which statements should be made? What should be left behind?

We are confronted with a collection of rooms. One follows the other. Black floor, white walls. Three. Through a doorway you get from one to the respective other. When walking into them, images appear: linguistically dissected, Kieslowski’s “No End” grows into the room, a tinge of glitter is sprinkled over the chronology of horror like in the murder book. At all events, out of every pragmatism you can get something romantic. By means of an ancient ritual, women collectively lament over the death of beauty, youth and eroticism. And yet, it is only solace. Elsewhere, in a tiled ambience, a day’s sweat is scrubbed off the body, also in a collective. The very sweat that, mixed with soapy water, disappears down the drain and from this world forever. The place is a strange place that would not exist without that tunnel after all. Because the entrance, or rather the possibility of an entrance decides on existence or non-existence. As if we had entered the place through a looking glass, we suddenly meet a tamend, strangely striped lion on the lap of a hairy human body, the artist Elaine Sturtevant, and above all a really big elephant herd, yellow snow, and again and again the mere self. 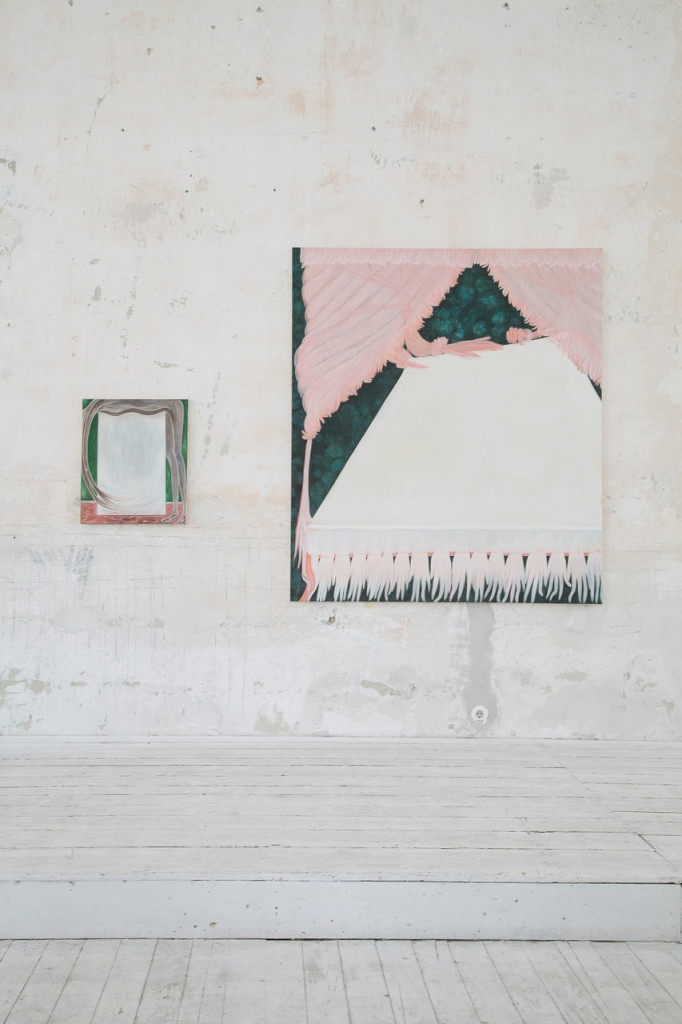 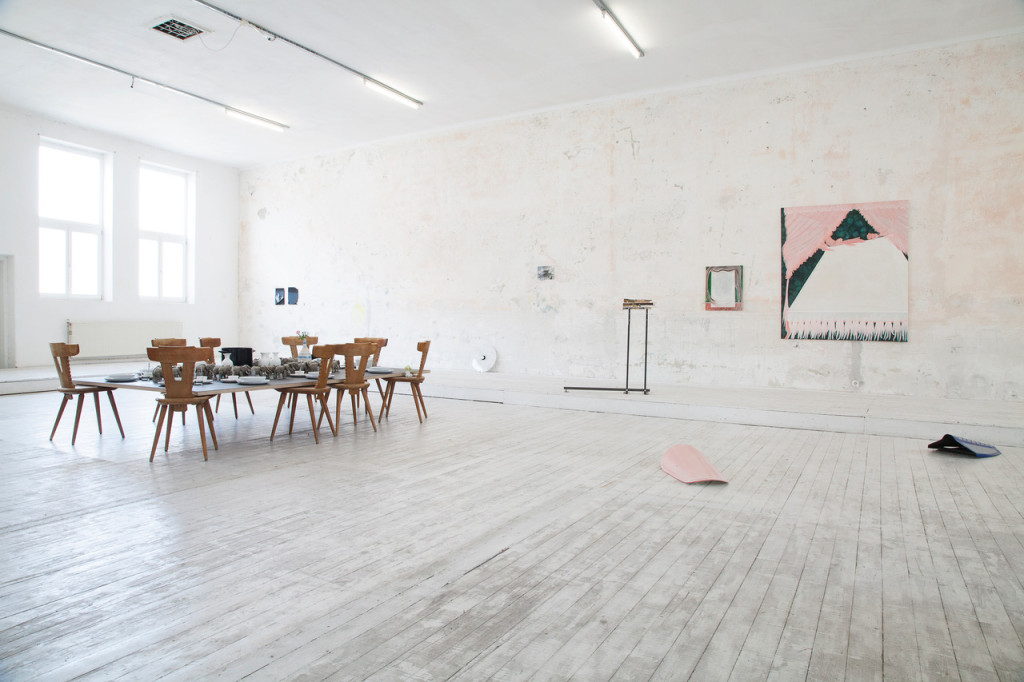 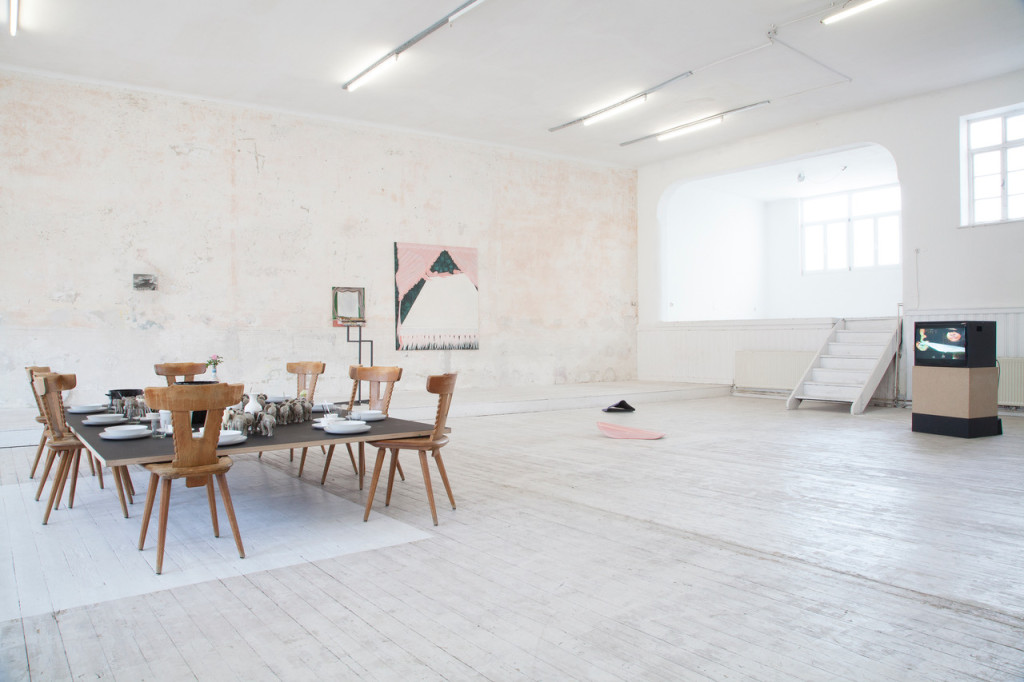 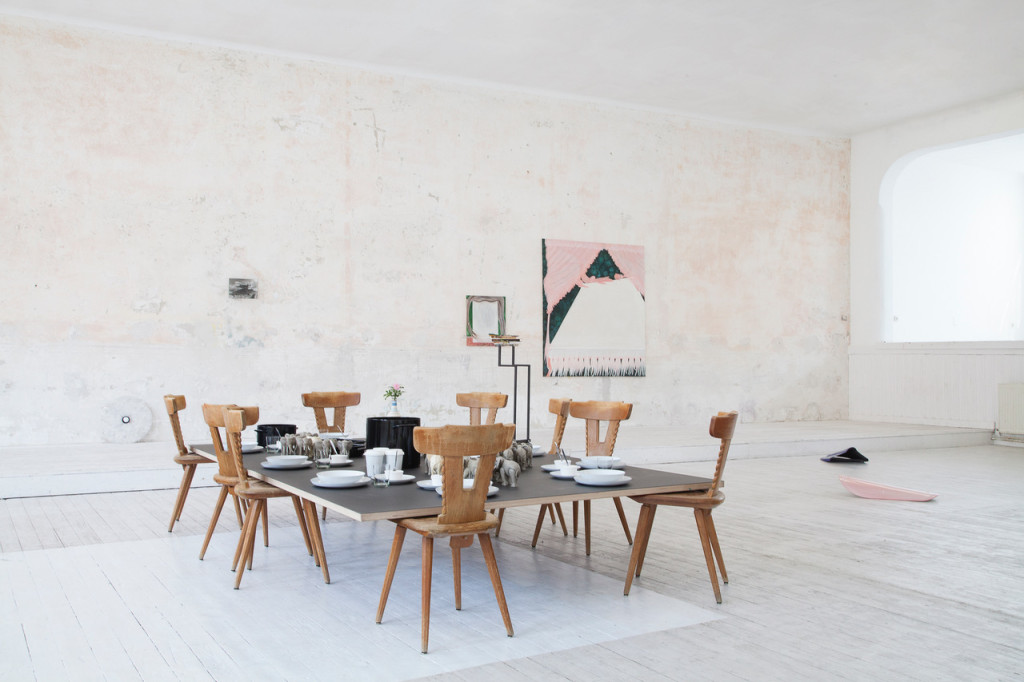 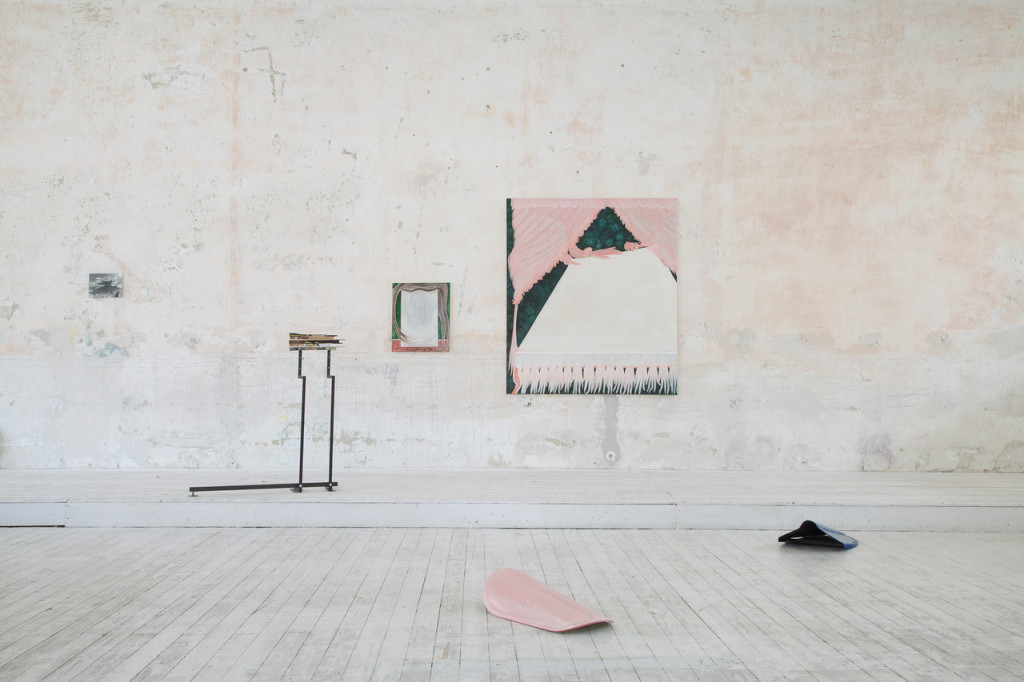 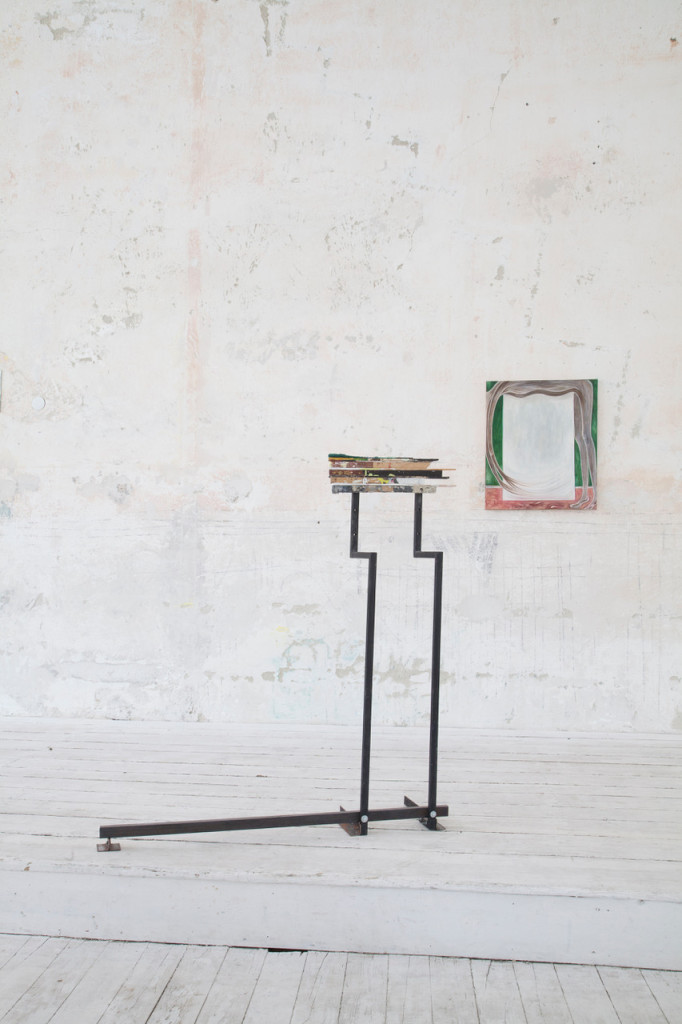 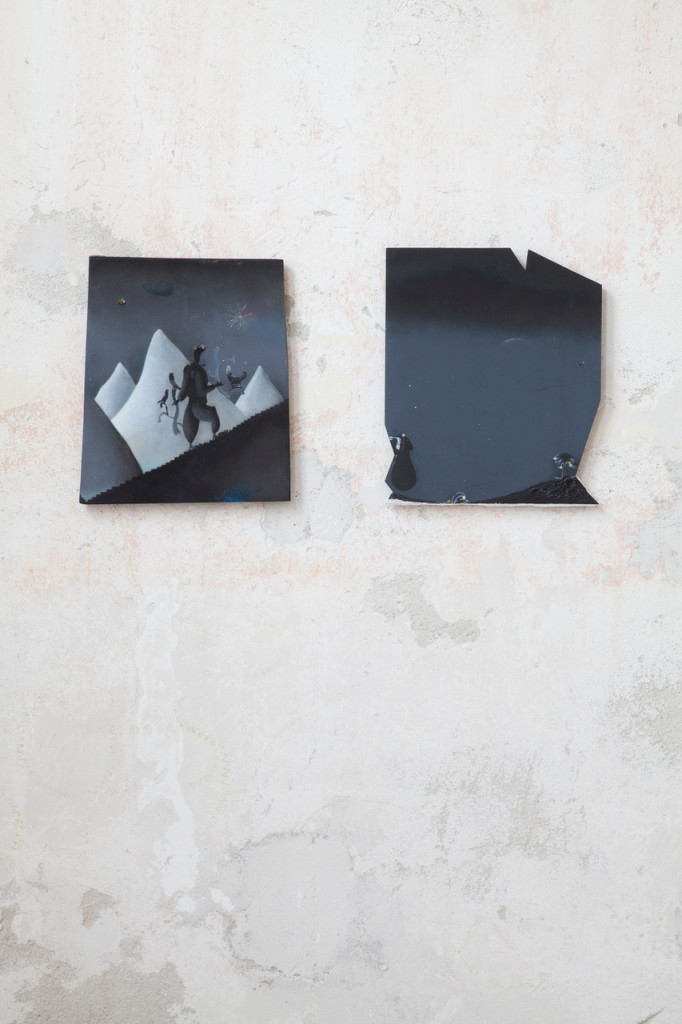 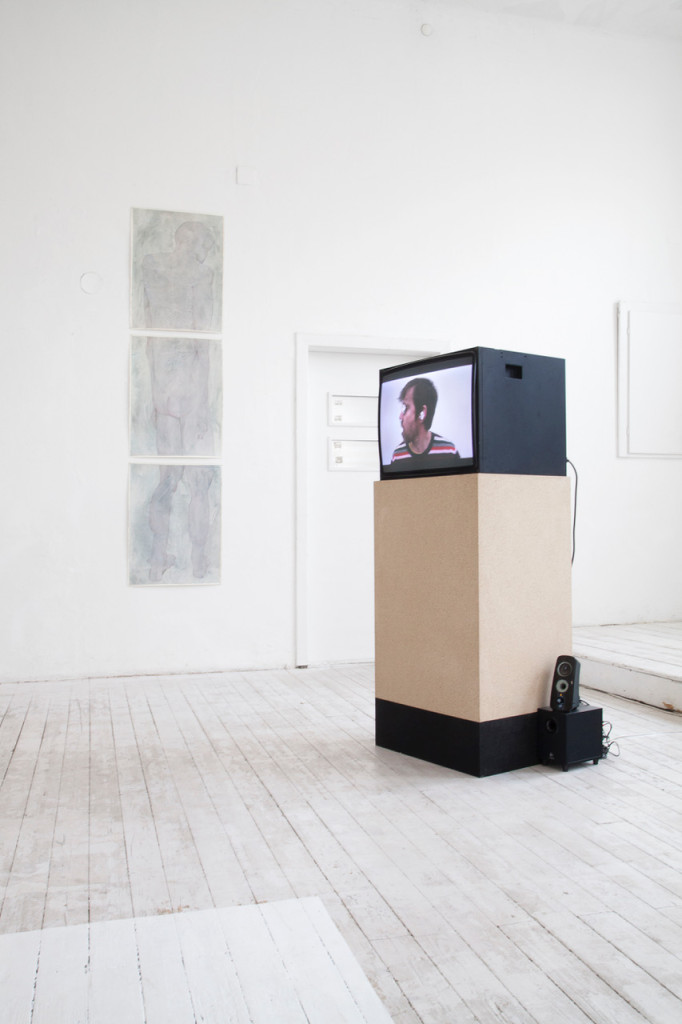 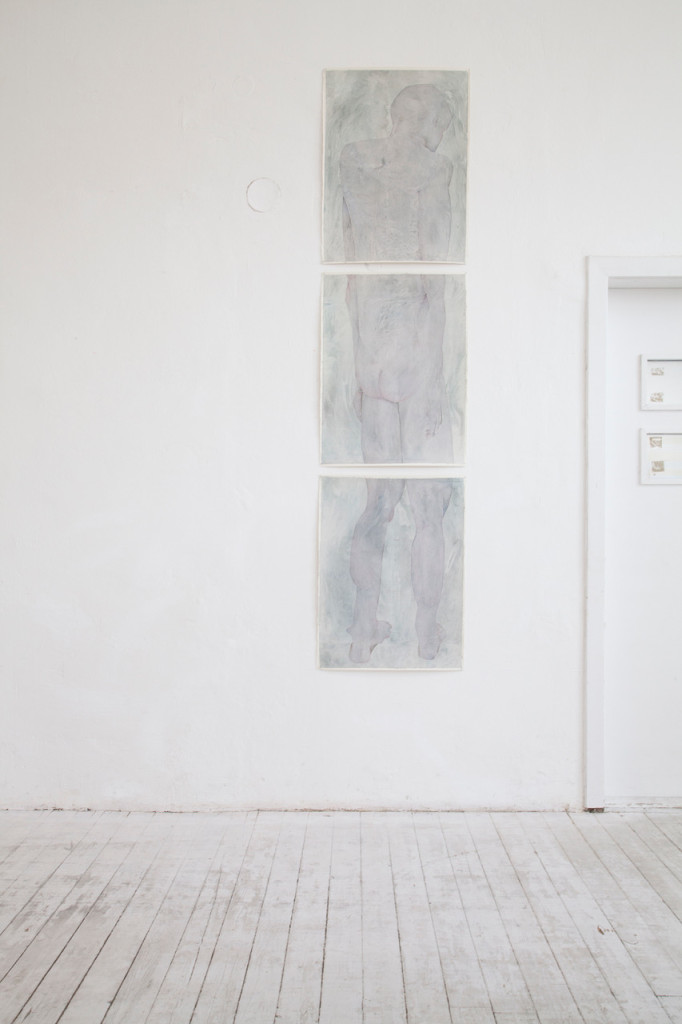 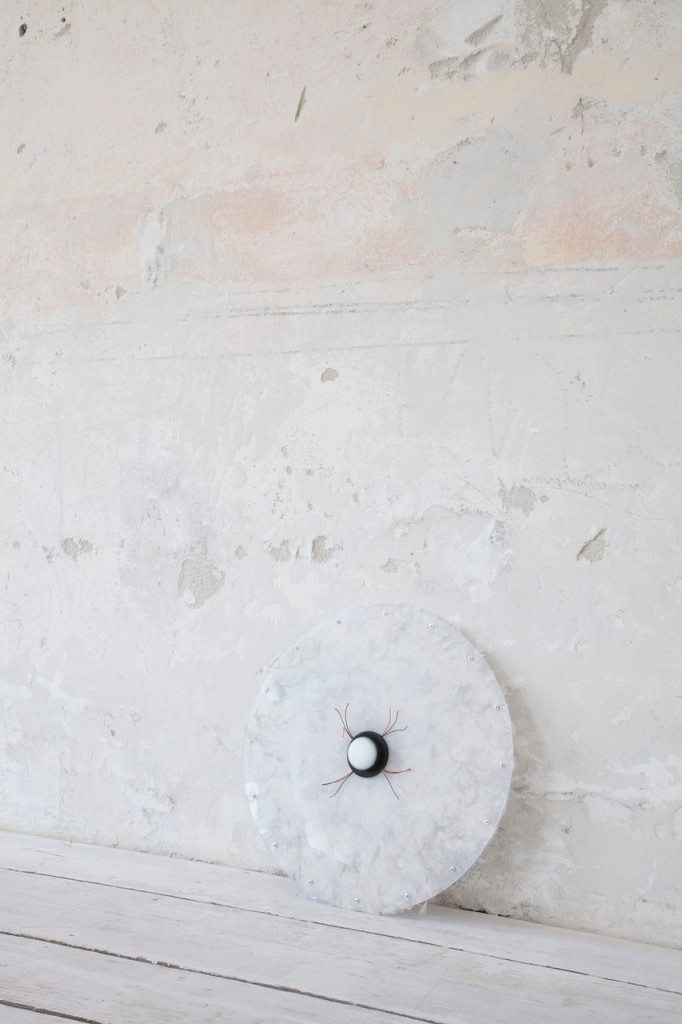 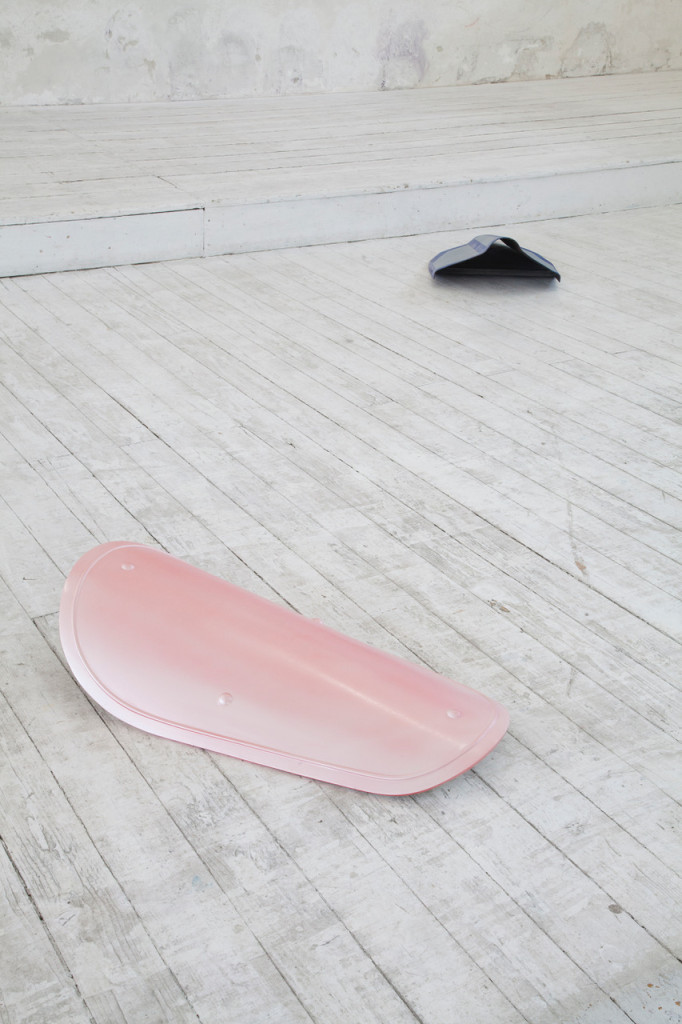 Julia Frank, ”To maintain (the body is our general medium for having a world)“, cardboard, wood, acrylic, sprayed nail polish, 73x39x15cm, 2015 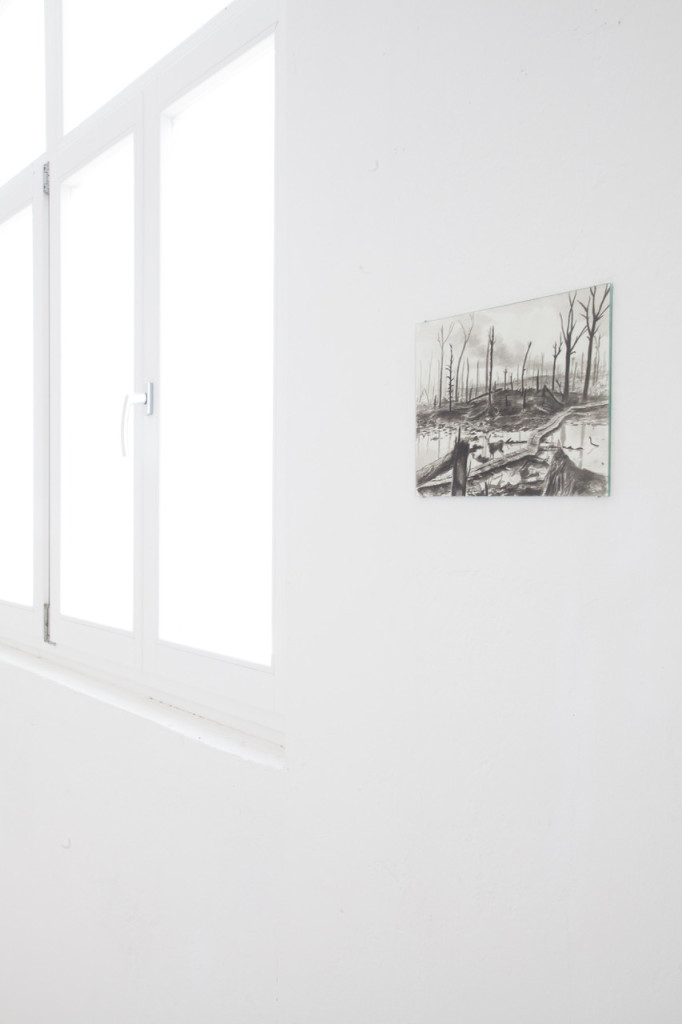 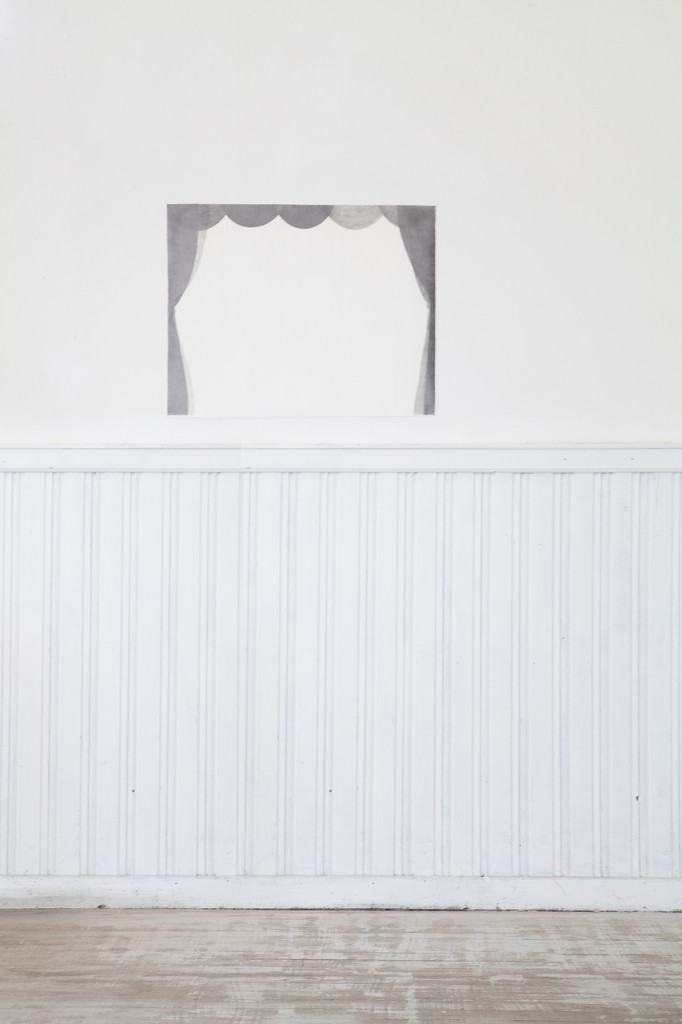 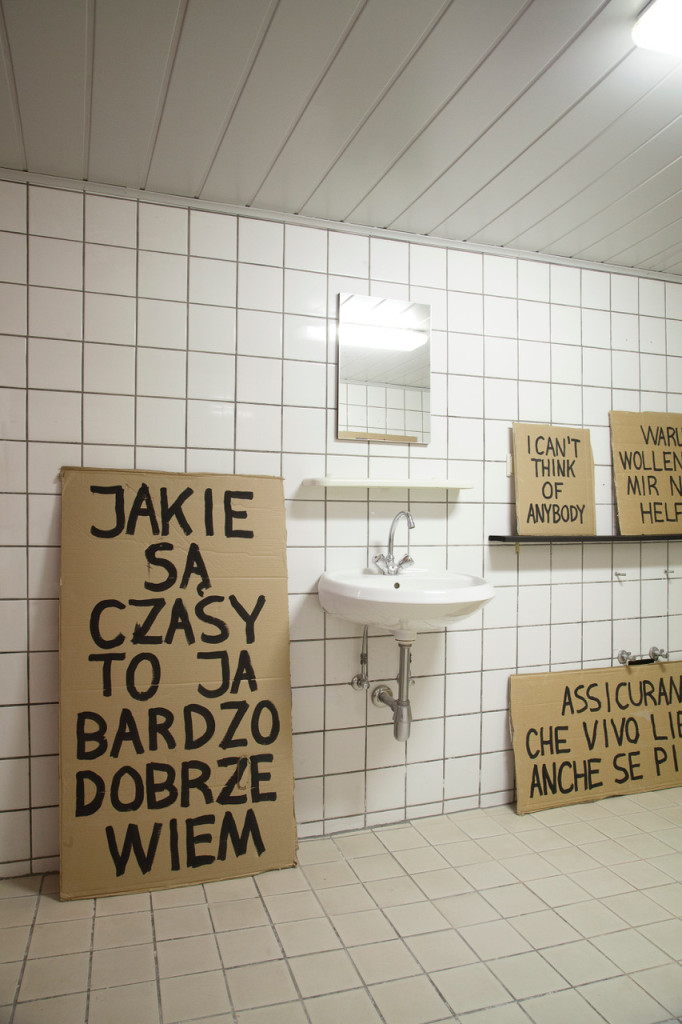 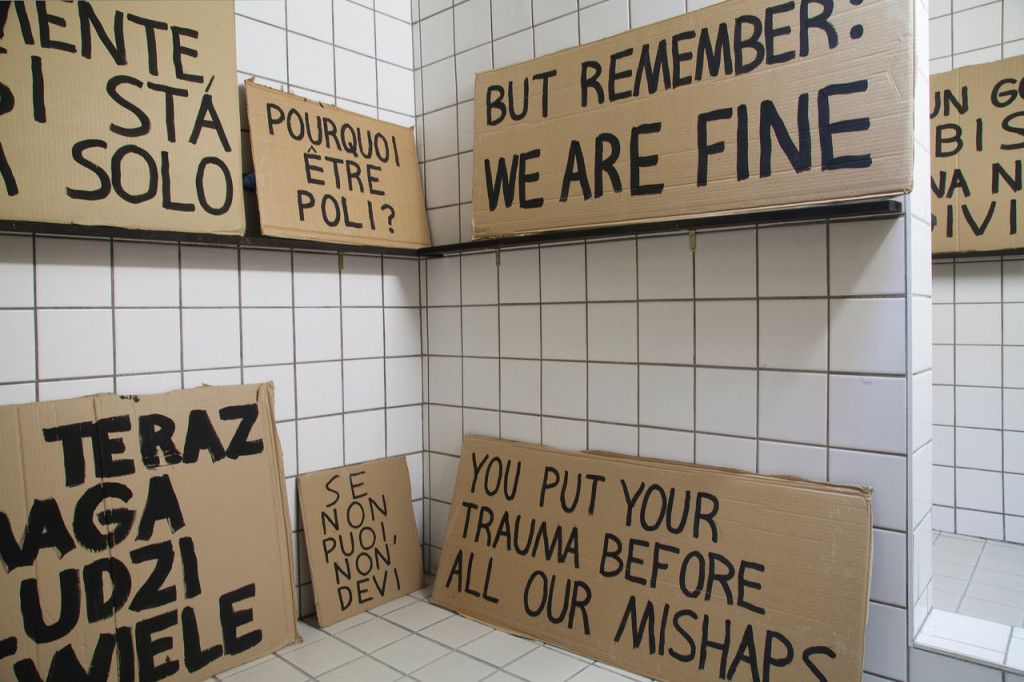 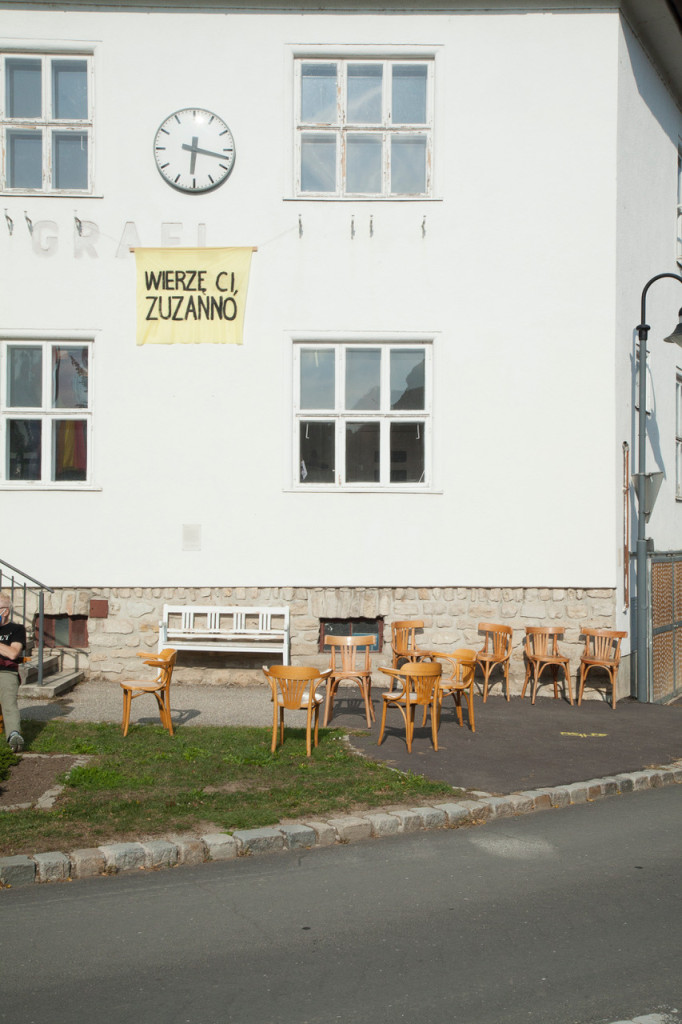